During my years as a graduate student at the Royal Northern College of Music (RNCM) in Manchester, England, I studied violin with Malcolm Layfield. Malcolm had been a student of the Polish-American violinist Bronislaw Gimpel in Glasgow and his association with another Polish-American violinist, Szymon Goldberg, had led Malcolm to name his ensemble, Goldberg Ensemble, established in 1982.

Goldberg Ensemble
Goldberg Ensemble was a small freelance string ensemble of 11 solo strings led by Malcolm and typically played without a conductor. Its members who lived around the country gathered a day or so before concert projects and the rehearsal period lasted a whole day (at least nine hours). Goldberg played approximately 12 concerts in a season, its large repertoire included works from Baroque through 20th century music. Two main projects of the ensemble were the Contemporary Series and the National Tour. As part of the Contemporary Series, Goldberg played through and recorded over 20 new works for the BBC annually and a selection from these works were included in a concert program(s) at the RNCM along with works of the well-established contemporary composers like Gorecki, Tavener, Maxwell-Davies among others. 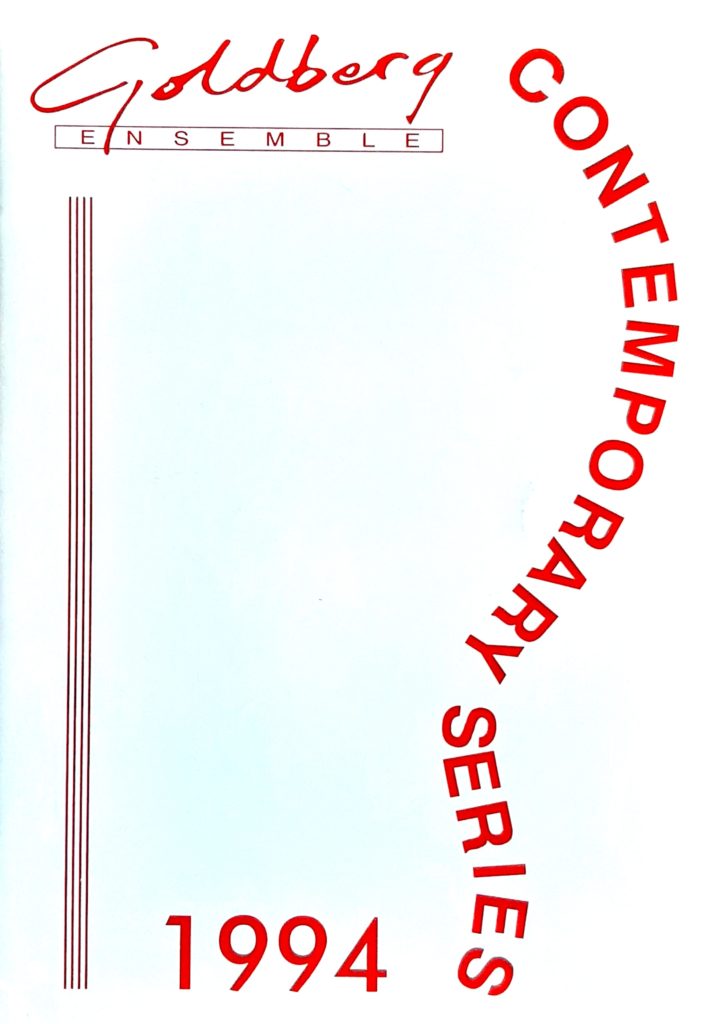 Martel Ensemble /
L’Orchestre de Chambre de Manchester
Malcolm also ran another ensemble that was made up of some of his students and potential members for its upper version, Goldberg Ensemble. This group of approximately 15 young(er) professionals was named after the French town of Martel in Southwestern France, famous for its walnuts and truffles. But Martel Ensemble had a split personality! When it performed in England it was Martel Ensemble and when it performed in France it was called, oh-so-poshly, L’Orchestre de Chambre de Manchester (Manchester Chamber Orchestra).

Violinist/Tutor/Businessman Malcolm
Malcolm was a successful violinist leading and conducting ensembles and orchestras around the UK and elsewhere, he was teaching violin at RNCM, the Chetham’s School of Music (also in Manchester) and at the University of Huddersfield. But that was not all: he was also importing goods like wine and cheese from France and even selling musical tours to France.

1994 Tour
I had been playing in Martel Ensemble in Manchester and in 1994 I also participated in the summer tour. It is not so easy for a Turk to travel in Europe and I had to obtain a visa for France.  So Malcolm wrote an invitation letter as the director of the ensemble, it took about 10 minutes, and I had my visa in hand.

Going to Martel
We left Manchester on August 20th and crossed the English Channel from Dover to Calais with the ferry. Our 1300 km bus trip going through the beautiful French countryside lasted about 18 hours and we arrived at Martel the next day. We were 18 musicians and travelling with about 30 holidaymakers, who were coming with us on a musical vacation as our regular audience. It is probably more correct to say that we were going with them as the music providers and, naturally, while they stayed at nice bed and breakfast cottages, we were staying in dormitories. The holidaymakers were having daily excursions in the region, visiting local vineyards, tasting wines and the region's famous pate au foie d'Oie, goose liver pate, and coming to our concerts every night. Performing for the same audience every night  meant for us at least one thing: having to play a different program every night! We were busy rehearing every day as we had been earlier in Manchester, and not even for a fee but only for experience and an expenses-paid trip.

Martel
We played eight concerts in seven days between August 22nd and 28th. Two of these were open-air concerts at the Marketplace in Martel. This small and quaint town dates back to early Medieval times and had earned the nickname “Martel” meaning "hammer" in French after a decisive victory at the Battle of Tours in 732. Other concerts were in historic churches and chateaus in nearby towns.

The shirt incident
Our first indoor concert was on August 23rd at the beautiful Château de Béduer, a 13th-century feudal castle overlooking the valley of the River Célé. I had borrowed a tuxedo shirt for the tour from Malcolm as I did not own one. I pulled out the crisp, folded shirt and as I got dressed I realized I had a problem. The shirt required stud buttons. I had a pair of cufflinks but no stud buttons with me! There was no way of finding half a dozen stud buttons in the middle of the French countryside. The solution came in the shape of adhesive tape! We taped the two sides of the shirt together all the way from my neck to my belt. This part was not so difficult but removing it at the end of a concert in the middle of August was like waxing my chest! Ouch!

Farewell Symphony
We played concerts at Turenne, Gluges and Sarrazac in addition to Martel and Beduer. Our repertoire included Telemann suites, Bach cantatas, Mozart and Haydn symphonies, chamber music works and also modern works like John Tavener’s The Protecting Veil. The final work of our concert at Église de Turenne was Haydn's Symphony no. 45 in f-sharp minor, famously known as the “Farewell”.

Famous anecdote
This symphony was composed in 1772 at the end of a very long summer spent by the Prince’s summer palace at Esterháza. The long-suffering musicians had been separated from their families who remained in Eisenstadt, where the winter court was, for months. Haydn kindly hinted at the musicians' desire to go home in the last movement’s closing Adagio. As the musicians blew out their candles one by one and left the stage, in the end only Haydn and Tomasini were left, playing on muted violins. It worked! The court packed up and left for Eisenstadt immediately.

The concert
I was playing as the principal second violin with Malcolm as concertmaster. When we were rehearsing at the church in the afternoon we had seen the doors on either side of the altar and decided the musicians who had to stand up and leave before the end of the symphony (we had no candles) could walk through the door on the right and get out of the church hall just like Haydn had meant exactly 222 years before, at the end of a summer season.

As the end of the symphony neared, our friends were leaving the stage. This is quite a nerve- wracking situation as little by little the orchestra is reduced to a violin duo. Toward the end Malcolm’s face started to change. He was looking in the direction of the others who had walked away and due to my central position facing the audience I could not see what was happening though it was not difficult to read from Malcolm’s turning color that something was happening.

As the symphony quietly finished and Malcolm and I stood up to take a bow, I caught a glimpse of the line (queue) that had formed in front of that door where the musicians were supposed to have walked off. Soon we found out that the door we had chosen earlier for this purpose only led to a small storage room and, since not everybody could fit in the room, one of them had tried to climb out of the small window in the storage room and had got stuck in it!