In today’s world, ‘hittin’ the road’ (at least until the arrival of CoVid 19) was rather normal and usual. Billions travel annually by various means and air travel has become more affordable and common. But this was not always the case, was it? What we consider common knowledge today, like boarding passes, check-ins, passport control etc., was not so long ago for a great number of people not common knowledge at all!

Many firsts
October 1, 1986. This is an important date in my life. A date of many firsts for me: my first flight, my first trip abroad, my first time on a subway train, my first stay at a five-star hotel, and our destination was the Soviet Union.

My boarding pass from the return flight

15-day concert tour
We were going on a 15-day concert tour with the Turkish Presidential Symphony Orchestra, one of the oldest orchestras in Europe, established in 1826. Our flight on a chartered Turkish Airlines plane took off from Ankara Esenboğa Airport destined for Moscow Sheremetyevo Airport. I was in the same row with the country’s most famous conductor and one of the most important violin soloists and was sitting in the window seat. One might think I chatted with the famous musicians all the way there but instead I was glued to the window. I probably didn't feel confident enough to talk with them since I was rather young, the youngest in the orchestra. After the mountains of northern Anatolia, we flew over the dark blue waters of the Black Sea and the beech forests of the Crimea and the Ukraine, which appeared like auburn- colored velvet rugs.

"Magyar? Polski?"
12.10 pm. Moscow. Our names had been sent to the Soviet authorities six months earlier and we all carried Turkish civil servant grey “service” passports but entering the Union was still not so easy. The young and stern- looking passport controller asked: “Magyar?” I assumed that meant ‘Macar’ ("Hungarian" in Turkish). Was I Hungarian? Could he not tell from my passport? I had to state the obvious: “Türk!” Another question: “Polski?” No. I am not Polish either – “Türk!” He continued to look at my passport and also looked around for a while and finally stamped my passport and let me pass. 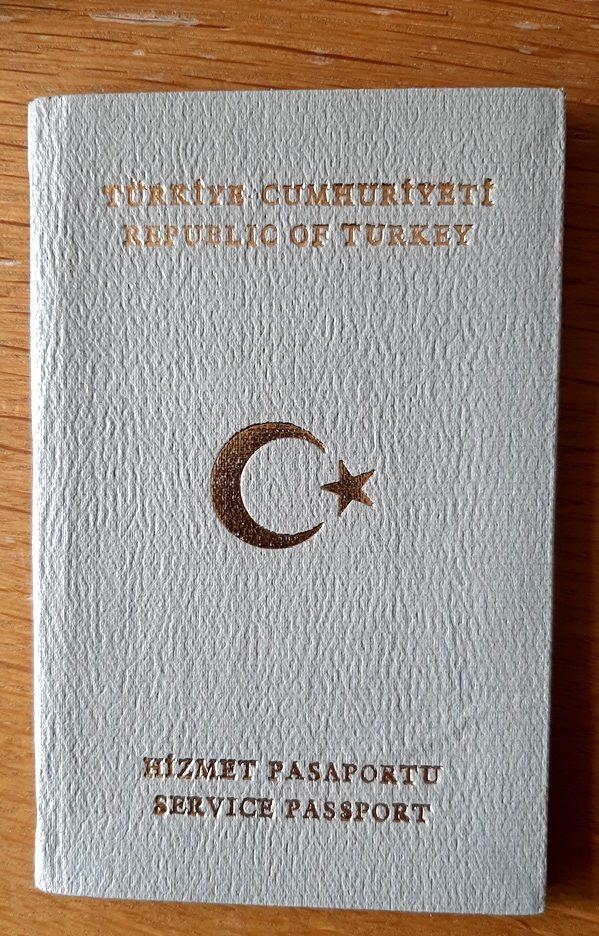 My first and only state service passport

Customs
Going through customs for our 110-strong group was a different story. In the past, very valuable instruments had been smuggled out of the Soviet Union in place of cheap instruments brought into the country so authorities were now very cautious. Every single instrument had to be registered: makers, catalog numbers (for state owned instruments) and even identifying marks like color and scratches and other visible damage that would be checked again before our departure. Small instruments, and their players, were lucky as we were done with the customs procedures in a couple of hours and by 4 pm we were on our buses heading to our hotel driving through the major avenues of Moscow city center.

More than a dozen stage personnel who were travelling with us were left at the airport along with several of the dozen translator/guides (and quite possibly also, agents) who accompanied us for the next 15 days, with the larger instruments and would join us at the hotel another 8 hours later.

Big in Moscow
Everything was big in Moscow: high and large buildings, streets that resembled eight-lane highways, endless parks, large monuments and even the traffic lights. It was already getting dark by the time we arrived at our hotel, a semi-circular 1777-room giant building: Hotel Cosmos.

Professional Newbie
Our 25-floor-high, very shiny looking hotel was built a few years before for the 1980 Summer Olympic Games and only foreign nationals were allowed to stay there. In institutional groups like ours there is always an unwritten hierarchy and seniority rules, and according to those I and my roommate would have to wait for a couple of hours to get our room keys and go to our rooms. I was the youngest member of the orchestra and was still a college level student at the Ankara State Conservatory, the top music school in the country. 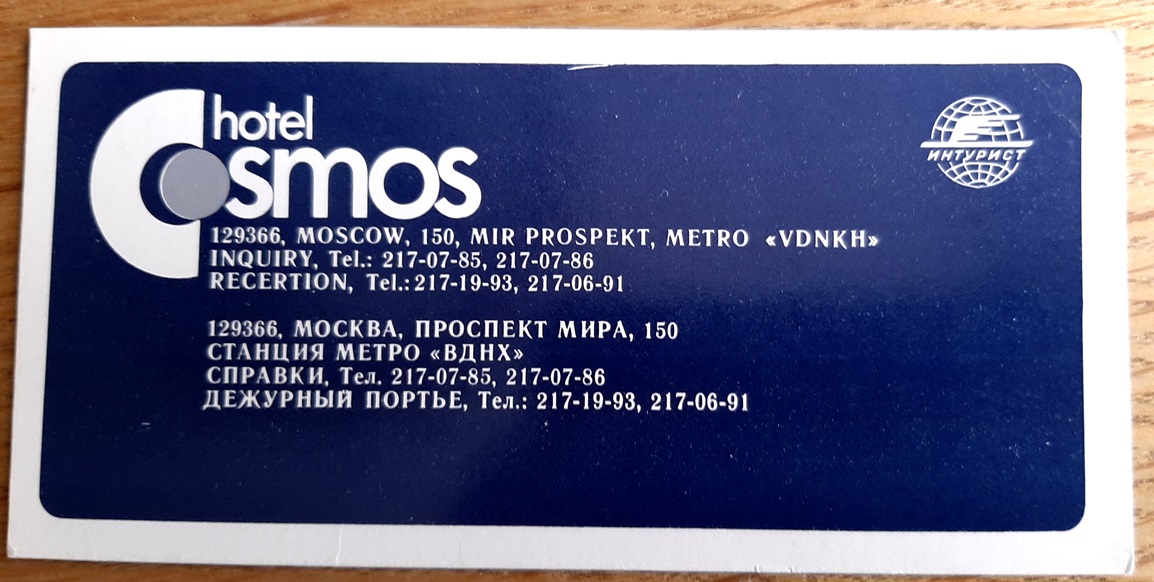 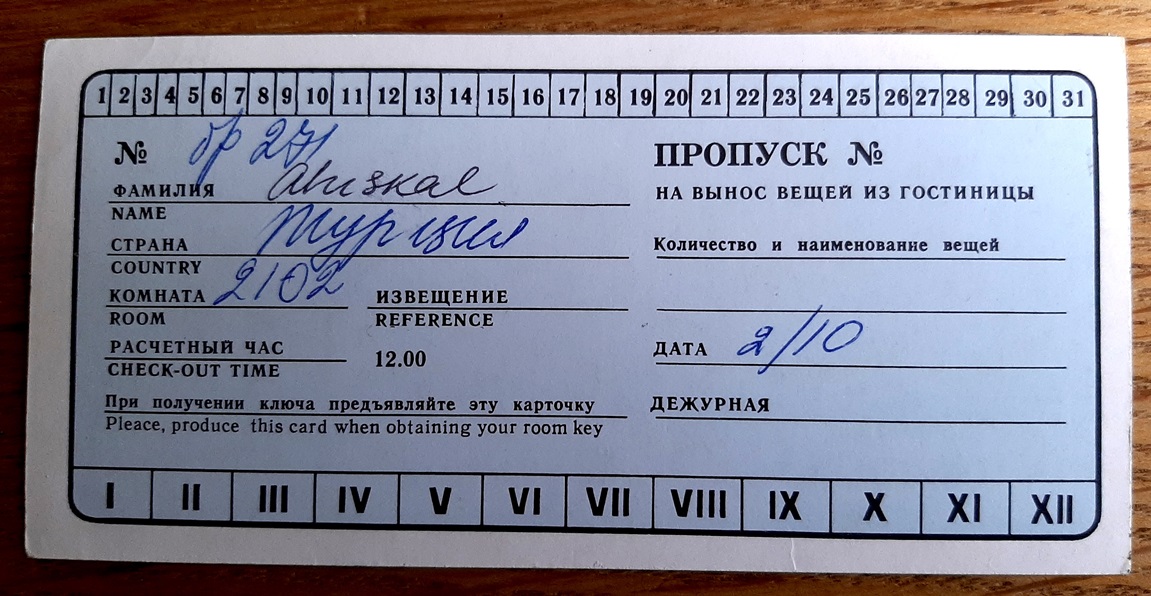 My room card's back, Hotel Cosmos

Our room was on the 21st floor. As soon as I walked into the room, I went to the window and looked at the bright lights of the city of Moscow that lay in front of my eyes. Our impressive view included the 500-acre state economical fair, VDNKH; the Monument to the Conquerors of the Space, a titanium-covered, 107-meter-high, shiny obelisk with a rocket at the top that was built following the launch of Sputnik 1 spacecraft in 1957; and a round building across the Mira Street that was very busy with a lot of people walking around. I thought perhaps a cinema or a theater building? I never let it get the best of me, but the moment I realized that only a glass wall separated me from the open space all the way down to the ground, my little fear of heights sent a shiver down my spine! 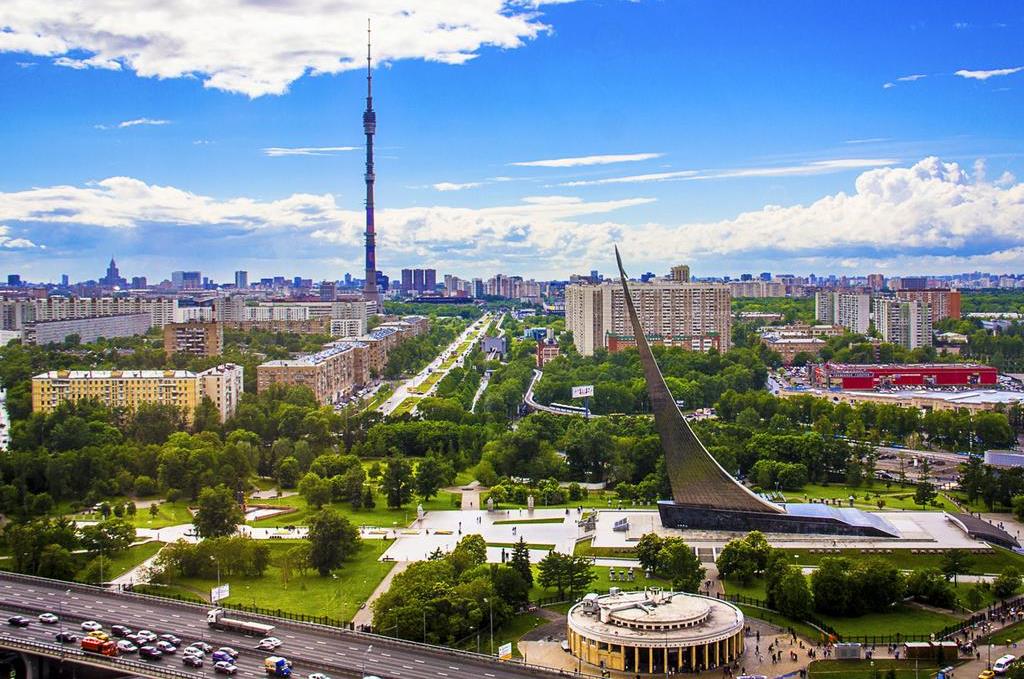 View from the hotel (source: internet)

Must explore
I had to explore. If you know me personally, you also know any other way would have been strange. I left the hotel, crossed the street (now there is an elevated highway there) and was simply rather shocked to find out that the round building I had seen from the 21st floor was a subway station. The next shock happened when I saw the escalator of the subway. It would not be an exaggeration to say that I could not see the bottom. I was to find out years later that this escalator was 140 meters (460 feet) long and VDNKH Metro Station was one of the deepest in Moscow at 55 (180 feet) meters underground. 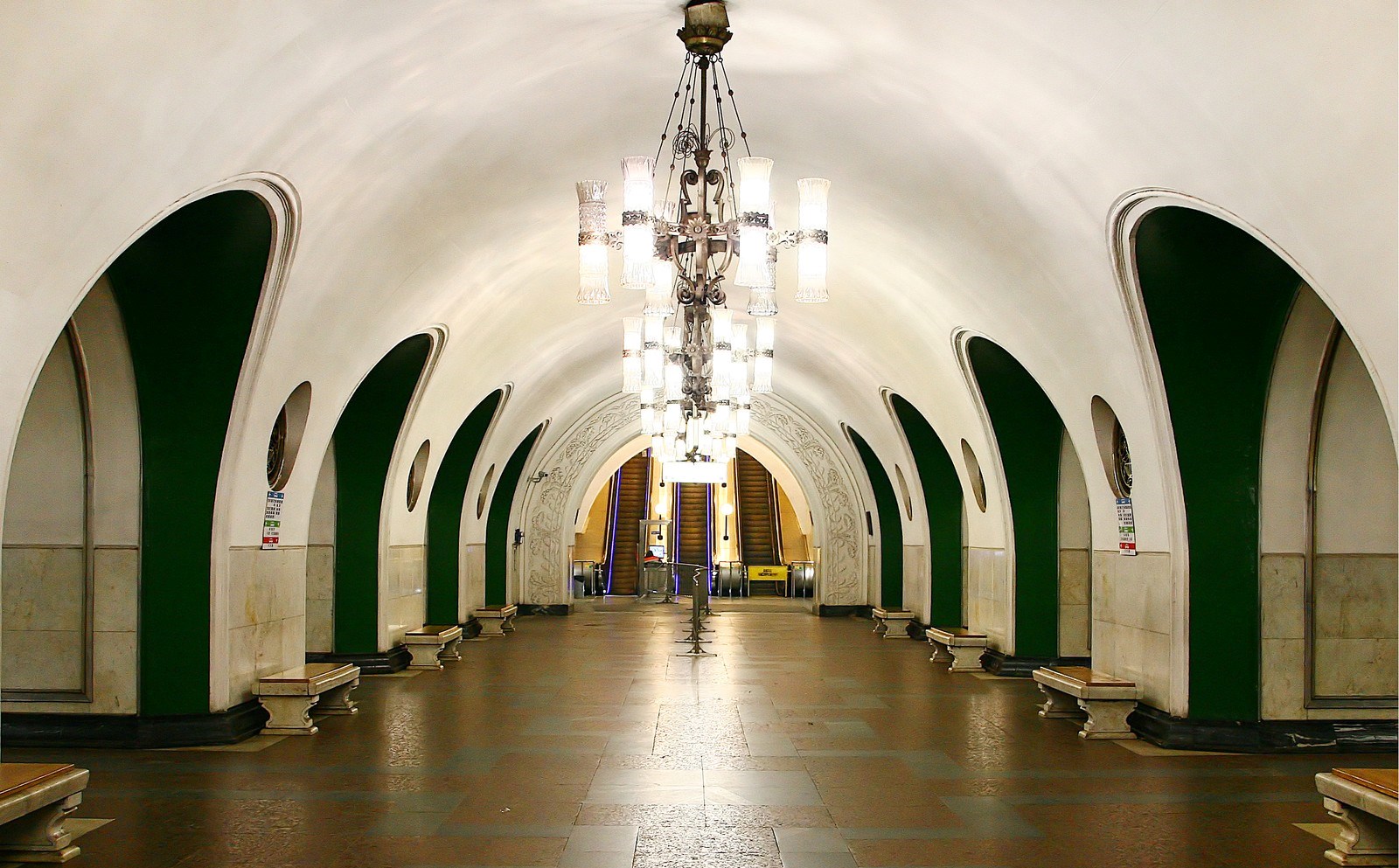 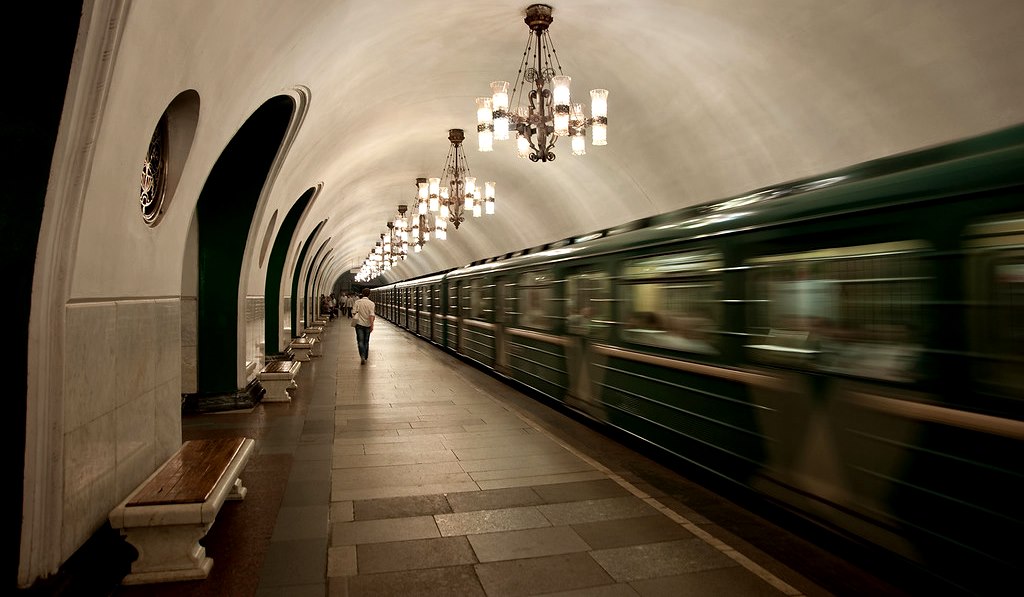 Dee-seen-fej-ted!
With a group of colleagues I ran into we took a short trip to the Red Square that first night. When we returned to the hotel I realized, with the day’s excitement, I had even forgotten to go to the bathroom. I speedily entered the bathroom only to find a "gift-wrapped" toilet bowl! The toilet bowl lid was closed and on it was a paper band with the inscription that I read as: Dee-seen-fej-ted! What did that mean? I had no idea as I spoke no more than a couple of words (I love you) in English. 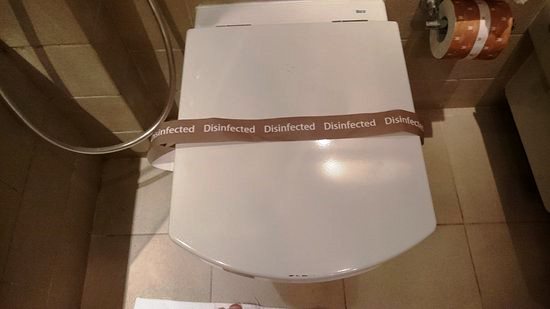 Just my luck! The only out-of-order toilet at the hotel must have found me! I urgently had to find a room with a functioning bathroom. It was already midnight and I had no idea who was staying in which rooms in this city-size hotel! I don’t remember what happened next or where I went. I don’t remember how long it took my brain, playing with the word “dees-een-fej-ted” to realize the resemblance to “dezenfekte”: a word we use in Turkish for "disinfected"!

So as you see, it was not always so easy to just “hit the road” for some of us! 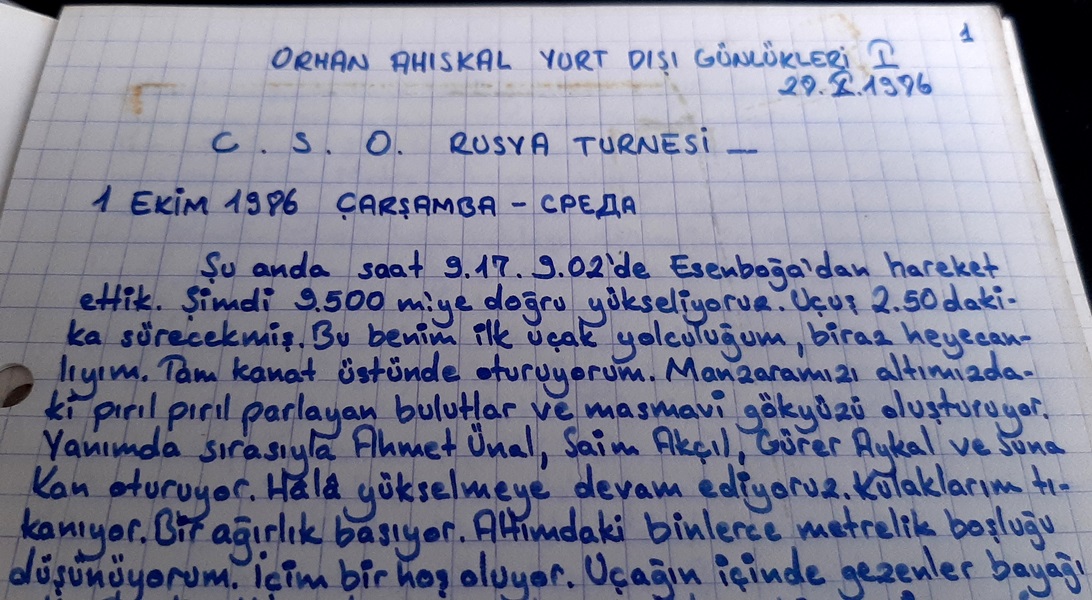 The very first page of my diaries that later evolved into travel notebooks. 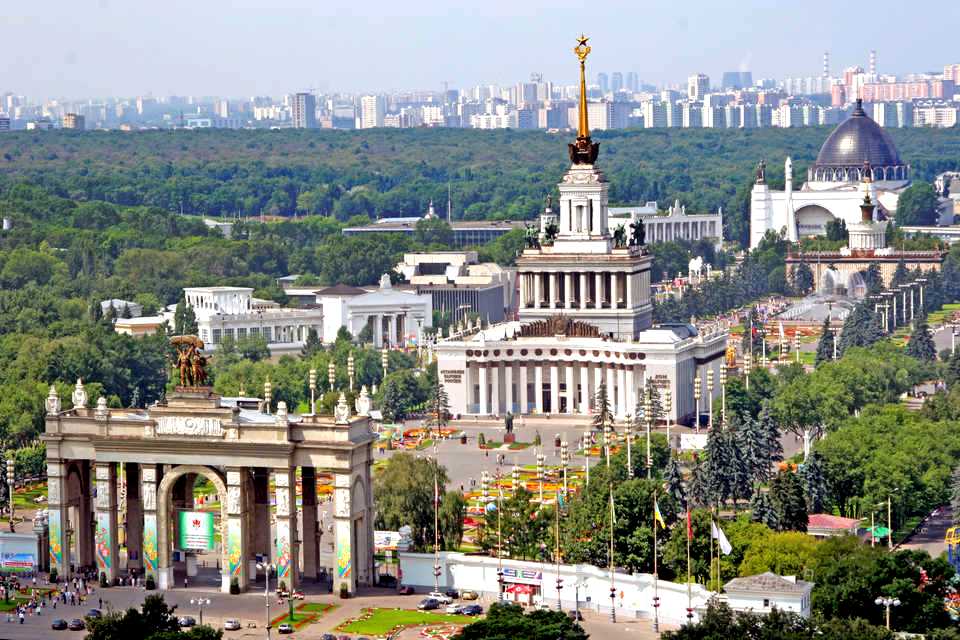